It is named after a local architect, James Baron Beard, who lived in Bow Street, where he had a house, workshops and a yard.  He died in 1841 at the young age of 48, and was buried in Somerton, where his brother John Baron Beard, lived.

In 1863 the Plymouth Brethren opened a chapel in Beard’s Yard.  In the following year, a Sunday School is recorded there, which nearly 200 children attended.  A report in the Western Gazette in 1872 refers to ‘Beard’s Yard Schools’, which were run by ‘the Misses Prankerd … for the benefit of their poor neighbours’. 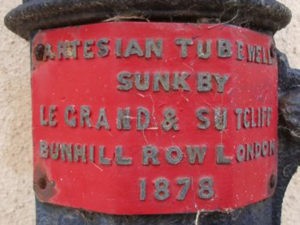 In the 1880s premises in Beard’s Yard were used as a Temperance Hall, and as the Salvation Army’s ‘barracks’.  Later, they became a Drill Hall, which was sold in 1919.