One of the finest memorials to Walter Bagehot exists in his own home town of Langport, in the same church in whose graveyard he is buried. The west window of All Saints’ Church was installed by his widow, Eliza Bagehot, in his memory, and is a fine example of Victorian stained glass.

The following is an article on this window written by Peter Burnett, a member of the Langport & District History Society, which was first published in the 2016 issue of the Society’s journal, Level Talk, and is reproduced by kind permission of its editor and the author.

Few readers of Level Talk will be unfamiliar with All Saints’ Church and its magnificent West Window, but most will not recognise its importance as the first ‘Arts & Crafts window’.

The nineteenth century had seen a re-emergence in stained glass manufacture in the United Kingdom, driven by the increased rate of church building after the numerous Acts of Parliament from 1818 to 1884, and artistically by the Gothic Revival promoted by various designers, most notably A. W. N. Pugin. As the century progressed, stained glass became more akin to an industry where potential buyers could choose from a catalogue of designs in a range of colours to suit budget or taste. It is against this background that the Arts & Crafts movement flourished, and the importance of the status of the artist came to the fore.

The five-light window at Langport dispensed with any canopy work or borders around the Old Testament figures – this was innovative for the date. This can be seen in Fig. 1, a typical window of the period, or by examining other windows in the Church. 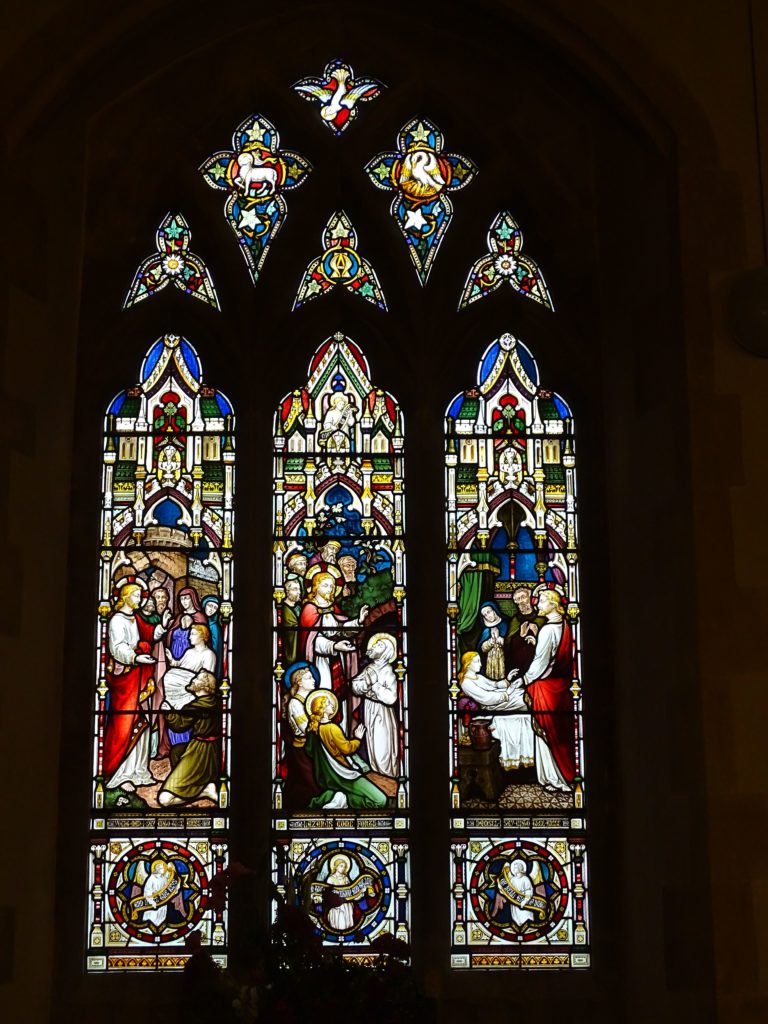 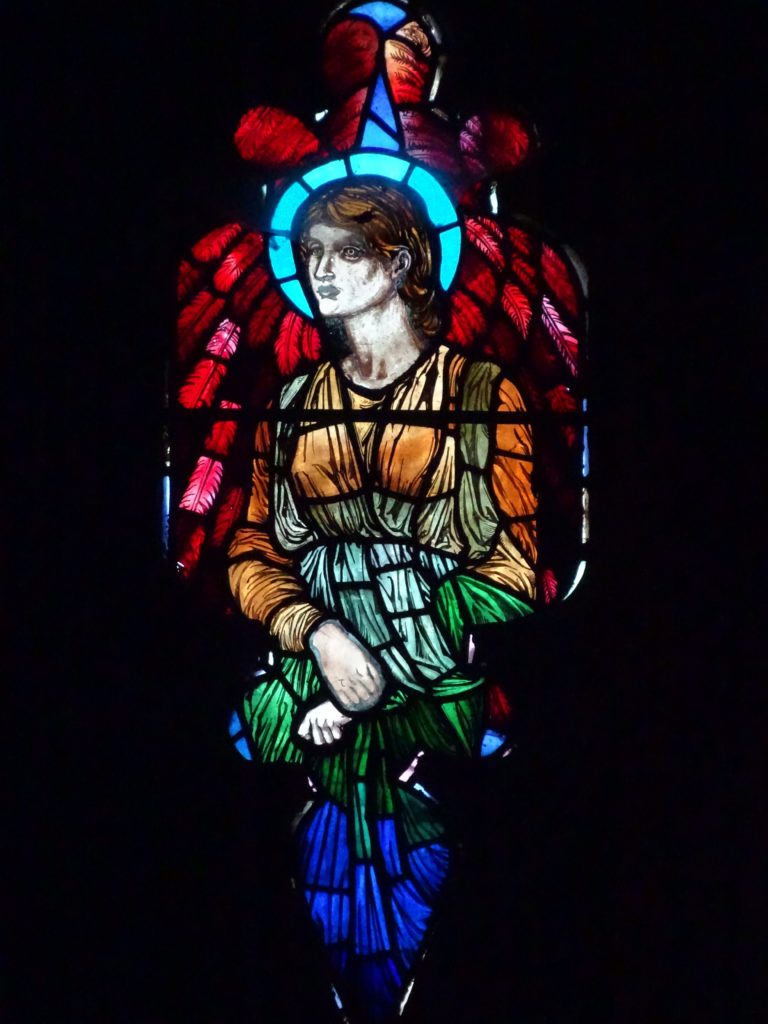 The designer and painter of the Langport window was Hugh Arthur Kennedy, whose work demonstrates a familiarity with work by both Edward Burne-Jones and Henry Holiday, and it has been suggested he may have worked in the studios of the former. The window was made by Belham & Co. of London, using the glass of Jesse Rust which was admired for its qualities due to the profusion of streaks, swirls and bubbles suspended or trapped within (see Fig. 2). This ‘antique glass’ was not manufactured in large quantities so the Langport window is especially important.

The other striking thing about the window is the speed of its compilation and installation. As can be seen from the Langport Herald article of 22nd December 1877 reproduced below, it was installed in the week before, and as Bagehot had only died in late March of that same year, this seems remarkably quick. From other records it is also apparent that Kennedy was working on a commission for Sunningwell Church in Berkshire that was only completed in Autumn 1877.

The article in the Langport Herald provides a description of the window and provides some of the meaning implicit in its design.

The West Window of All Saints’

This large and handsome memorial window, the gift of the widow of the late eminent and widely-respected Mr Walter Bagehot, has during the past week been inserted in the tower of All Saints’ Church. Of which it will henceforth form one of the most beautiful and impressive features. The work, which is conceived and carried out in the highest style of art, has been designed and painted by Mr H A Kennedy, a pupil of Mr Ruskin’s, on beautifully varied antique glass, and executed by Messers S. Belham and Co., at their works, 155, Buckingham Palace Road, London. The window as a memorial contains five figures, chosen to represent the component virtues of a great character. The first figure on the left is Abraham, who is looking at the stars, which were a symbol of the promise made to him; he represents faith, the reliance on a guiding power greater than we can comprehend. This figure is balanced in colour and composition by that of Solomon on the extreme right; he is depicted in the court of his palace, studying by night, the temple that he built standing dark behind him against the moonlit sky. He represents wisdom, and the knowledge which human diligence is allowed to attain. The second figure on the left is Job; he has just heard of the calamities that have come upon him, and, bowing his head, he rends his mantle in silence. Behind him are seen the ruins of his son’s house, and the fire from God descending to complete the destruction of his possessions. Corresponding to this subject on the right is a representation of Moses descending from the mountains, among whose snow-covered peaks is seen Sinai, dark and covered with glowing flames. He holds the tables of the law in his hands, and he looks down over the plains where the Children of Israel are already dancing round the golden calf. These two figures may be taken to denote respectively that Faith is not to be shaken by extraordinary events, as shown by the endurance of Job; and also that faith and knowledge must result in a rule of daily life, as shown by the commandments which Moses brings from God to man. The central figure is that of David, representing inspiration; his soul is filled with feelings beyond the power of music to express, for the harp in his left hand is unused, while with his right hand upraised he gazes heavenward with an intense expression of adoration in his face. He is clothed in crimson, the colour which is the key-note of the whole design. It is dark around his feet, and grows lighter as it ascends; it is echoed in the colour of the sunset behind him, and leads the eye on until it is taken up by the crimson wings of the choir of angels in the tracery lights. To distinguish these celestial figures from those below, the colour of their drapery is made to vary, like that of a rainbow, from the deep blue at their feet to a flame-colour whre it approaches the ruby of their wings. It is needless to point out the manifold beauties of this composition, for these are apparent at first sight, and become more so upon close inspection and careful study. The whole work is one which reflects the greatest credit upon the artists concerned in its production, and the result must prove deeply gratifying to the generous donor by whom our church has been so permanently enriched.

While the church is justifiably celebrated for its restored medieval glass in the East Window, perhaps the next time you visit All Saints’ you will take more than a cursory glance at the West Window, and be reminded of its significance, not just to Walter Bagehot of Langport, but also to the history of the Arts & Crafts Movement.

Much of the information used in the compiling of this article came from Peter Cormack’s Arts & Crafts Stained Glass published in 2015 by Yale University Press. The article from the Langport Herald was found at the Somerset Heritage Centre, Taunton.