You are here: Home / Langport History / Businesses / For Every Cloud

Bow Street has been home to many different types of shop over the years, and on the north side of the street For Every Cloud opened in 2013, selling art and craft materials and running creative workshops. Owned and run by Donna Vale, it is three doors west of the Town Hall, and has an intriguing history.

In the course of repainting the front of the shop, evidence of an earlier occupant was revealed. The Langport Area Development Trust, which was active between about 2003 and 2010, progressed many projects in the town, including the refurbishment of the Great Bow Wharf Warehouse. They also established a Community Office in this building. Later, the Community Office was relocated next door and became known as the Langport Information Office.

Some residents with longer memories still recall an earlier time when For Every Cloud and the Langport Information Centre housed a business run by the Coate family. Henry James Coate, whose father was a farmer at Stathe, became a willow merchant, and later a wicker chair and basket maker. He moved into the shop in Bow Street some time during the 1890s. They owned a shop there right up to the 1950s, or thereabouts. The street scene has changed little since then.

Click on an image to enlarge it and see the caption

The story of Coate's coat

When Donna was refurbishing her shop premises, she discovered a tattered jacket with the letters GPO on the collar, and buttons with the initials of George V. It looked to be about 100 years old. She began to research who might have been the owner of the postal jacket.

Step forward Pamela Rayne, (née Coate), granddaughter of Henry, the wicker chair maker. She contacted Donna to say that she thought the jacket might have belonged to her father Clifford.

“My paternal grandparents had a double fronted shop and sold confectionery, cigarettes and basket ware made by my grandfather, who was very accomplished. I remember watching him work in a small workshop which was situated in the garden.

As a young child I lived with my parents in a cottage belonging to my maternal grandparents, which was situated beyond their premises. They had a plumbing and decorating business and shop (Hector and Son) on the other side of Bow Street.

When my paternal grandparents became older they downsized by just keeping the confectionery business, and the other shop window was replaced with a house window and we moved into that side of the property. At that time it consisted of a passage type hall, a sitting room, dining room and kitchen on the ground floor and two double and one single bedroom and a small room with a loo and wash basin on the second floor. A steep staircase led to a bathroom and attic rooms on the top floor, one window of which overlooked the moors. The garden at that time went right down to the moors with an exit door.

My grandparents’ side of the property consisted of the shop, a sitting room with a door to the right leading to the main staircase, a living room, a small kitchen with back stars leading to a bathroom, a loo next door to the kitchen and a large coal house next on. There were several large outhouses. Upstairs there were two bedrooms, one double and one very large. The garden as mentioned was shared and went right down to the moors.

The Post Office at that time was a large GPO and had a busy telephone exchange on the top floor. My father latterly was Postmaster for many years prior to his retirement aged 60. I don’t know when he actually started working for the Post Office. It may have been when he left what was then the Langport Grammar School, and of course prior to his joining up during the 1914 to 1918 war. He was in the Signals Corps and returned to the GPO after the war.

When my paternal grandparents died, their shop was let but my aunt continued to live in the house. My father died in 1963 and my mother continued living in that house. However, when my aunt died, her part of the property was left to her friend. At that time my mother, who was 76, decided to come to live with us and sold her property to a Mrs Lamb. This was probably about 1975. Since then there have been many different owners and tenants and many alterations.

I attended St Gildas Convent for the age of 5, and on leaving school worked for a time in Lloyds Bank, as they were short staffed and still waiting for the men to return from the war. Later I worked at County Hall in Taunton, and lastly worked as Secretary to the Headmaster at Huish Secondary Modern. I married when I was 22 and left Langport shortly after. Langport has grown and altered incredibly since I left. I am now almost 85!”

With grateful thanks to Pamela Rayne and Donna Vale. 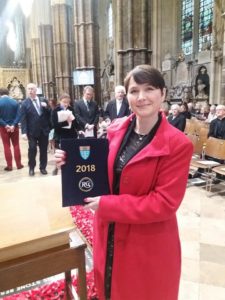 In 2018 Donna made her own piece of history for Westminster Abbey.

The following article explains how:

Earlier this year, Langport Artist Donna Vale responded to a call to tender for a piece of work for Westminster Abbey and in February, Donna was delighted to be informed that she had been successful and commissioned by The Royal Commonwealth Society and Westminster Abbey to provide the Commonwealth Service with a commemorative and unique artwork. This piece of work took the form of a book that gathered the hopes and wishes of children from the Commonwealth.

Donna said “It was a real shock to get the phone call to say I had been picked to make the piece, but also exciting at the same time. It is a really good opportunity to promote the Arts in the South West”
Donna was asked to design and create an art task for children aged 3 to 12 years. The outcome was to bring the many individual contributions together to make a beautiful and unique object that reflects the 2018 Commonwealth theme of “Towards a Common Future”.

Aaron Paterson, of Westminster Abbey Education team, felt that Donna’s style, her ability to facilitate a creative process, work to tight deadlines, together with her inimitable style made her the perfect artist to take on this challenging piece of work. Donna spent a few days at Westminster Abbey with The Royal Commonwealth Society during February half term. She worked tirelessly with hundreds of children and the Community Education Officer’s team creating beautiful images. The children’s work was then transposed onto the pages of a book with a velvet embroidered cover. This book was delivered to Westminster Abbey and will be presented at the Service.

Donna added “It has been a privilege to work with a team at Westminster Abbey and what an amazing place to teach a workshop. I am looking forward to attending the service in London and seeing the Royal Family.”

The Service features a mix of testimonies, readings and musical performances from talented artists across the Commonwealth and will reflect the 2018 Commonwealth theme of “Towards a Common Future”. The theme focuses on building on the strengths of the Commonwealth to ensure we are responsive to global challenges and deliver a more prosperous, secure, sustainable and fair future for all citizens, particularly its young people.