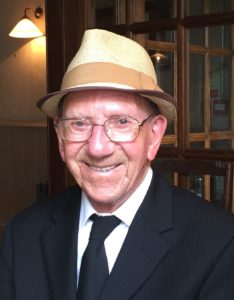 George Moore and his granddaughter Christina Burgoyne have very kindly sent us George’s memories of his time in Langport as an evacuee.  The following story, written in 2018, is in George’s own words. The History Society is indebted to George and Christina for letting us publish his very personal memoir.

From London to Langport: the memoirs of George Moore, a wartime evacuee

Welcome to the story of four evacuees from London in 1939. Bobby, John, Charlie and George, 4yrs, 6yrs, 8yrs and 10yrs old. Put on a train to who knows where. About 50 evacuees all together arrived in the country, marched to the village hall where ladies who wanted to look after them waited, away from the bombs in London. A lady came to George and asked “how many are there of you” – “four of us, lady”. She said to someone, “I will take these four”. Outside the hall the Lady said “get in the car boys!, Blimey – never seen a car before. The lady’s name was Mrs. Mathias. She lived in a big mansion called “The Brooklands”. By the way it is still there today. Mrs. Mathias changed the four little Cockney’s lives forever. Mr Mathias was an ex Army officer, on Saturdays he used to form us in a single line and march us to the sweet shop. We were rationed 2oz each a week. We thought it good fun to march. Going back we could not wait to eat our sweets, we were not allowed to while marching. We had great times. We stayed at Brooklands for about 18 months. The war was still on and Jerry was flying over us, but did not drop bombs on us four, plenty on London. Mum and Dad survived.

Going back, County Stores was a shop near the corner of Main Street, it’s now called ‘La Fleure Too’.

The American convoys with great big Lorries with tanks on the back used to break all the paving slabs on that corner of Post Office to get around. That shop belonged to C.S. and I had a two wheel big barrow to transport stores up to that shop. That barrow’s handles were as big as me. I also had a bike that had a frame on the front to carry cardboard boxes of groceries to deliver to local customers that was hard to pedal. The worst customer was a Mrs Prince who lived up the biggest hill near Brooklands. The road now leads to Somerton.

I liked working in C.S. I had to pull off the muslin that was wrapped around the blocks of cheese and box 3 times a week. Don’t forget everything was rationed 2oz per person a week. Bacon was scarce but Mr Conner made sure his favourite got some. Roughly every 2 weeks he would give me extra rations for Mrs Brown. Another young boy came to work in C.S., didn’t last long, he was caught nicking packets of tea.

I left C.S. and went to work in the garage down a bit further in Main Street. The mechanic’s name was Joe; he was deferred from the forces because he was repairing farm machinery. That is what I was told. We became mates. Across the road to us was the Blacksmiths, we palled up with Ken, he worked there. One day an Army dispatch rider came in and asked Joe if he could leave his motor bike with us, he was going on leave, Joe said yes and off he went. After a few weeks he didn’t come back, Joe asked Mr Kitchener, the owner of the garage who lived on the premises. He said “that rider won’t come back. I think he deserted. If he was going on leave he would not be allowed to go on leave with it”. So Joe and I had a motor bike. Mr Kitchener had an old bike out the back of his house that was going. He gave us that, what a stroke of luck. That’s where our friendship really got going with Ken because he loved motor bikes. After work one night we went round Ken’s place where he lived with his parents. What I have not said although we had two bikes, we had no petrol as it was also rationed.

We had to leave Brooklands when Mr Mathias and family moved to somewhere in Wales, our luxury stay came to an end. We all went to places in the district of Wearne. I went to Merrick’s Farm, owned by Mr and Mrs Bown and family. Their son Norman worked on Elstone’s Farm and their daughter Dorothy worked in the ladies department in County Stores. And so began my time living on a small farm. I didn’t know one end of a horse to the other, but I soon found out, also all I knew was milk came from a bottle. I was introduced to the milking machine called a cow. To a little Cockney boy all these things were amazing. I have great memories of my time on the farm and the wonderful countryside I lived in. Mrs Bown took me under her wing and taught me to milk cows dry handed, not like most people who wet their hands, no milking machines in those days.

Mrs Bown told and showed me over a period of time how to cut hedges with a sickle. If I did not know about the birds and bees before, living on a farm was a great experience, believe me. I became so eager to learn. I was still going to school. After a little while I left school and went into farm work for a living. I became a jack of all trades working on Bown’s farm. Hay making, falling off wagons, cider making, getting caught drinking cider: boy when that happens, who cares, I’m happy!

After I left school I also worked in Langport, in County Stores as well as the garage. In my spare time I still did plenty of jobs on the farm at Bown’s. I was still living on Bown’s when I left the garage job and went to work on a farm in Bowden’s Hills near Wearne, the farmer Mr Northover and I got on well because I loved farm work and animals, milking, cleaning out stalls and general farm work.

We welcomed a land girl who came to work on the farm; she was as green as grass but eager to learn. Her first test was to help me give the calves milk, No titty bottles in them days, just milk in a bucket, put your hand in the milk and they sucked on your fingers. “I am not going to do that” she said, “they will bite my fingers off”. I really took to farm work. Mr Northover taught me to plough with a tractor and plough, cut hedges, planting and harvesting all the feed for the cattle and other animals. It was pretty easy in summer but winter time it was very hard work preparing the winter food, only hand machines to cut up a big lot of mangolds, they were as big as melons but solid. Twice a day I cut hay from the hayrick then humped that to the animals in horse and cart, also milked the cows twice a day. I learnt a lot, I enjoyed my time on the farm. Then the war ended, I returned to London a lot happier than when I arrived in Langport Somerset in 1939 aged 10 years.

I sometimes wonder how many hours I did work each day.

I was earning the following at this time.

At 18yrs old I was called up to do my 2yrs in the army. First I had to report to West Scotland, from there we crossed on a ferry to Northern Ireland for 6 weeks training, then from there back to Warley Barracks in Essex England for more training. After that I was shipped off to Egypt for 18 months. I was put in the H.Q. as a troop carrier driver or anything they told me to drive, good experience.

It was great being in Egypt. First I was in Suez, patrolling the bank of the canal with troops, then a spell in Cairo. Mind you I wasn’t a tourist, the officers soon let me know that. Go here go there, no time for sightseeing, but we had to take a few troops to the pyramids just outside Cairo. What a wonderful day that was. I left Cairo and went back to Suez and onto Ismailia Egypt, right alongside the canal. I was in the Army under the wing of the Transport Officers and Sergeants Corporals and our transport vehicles were right hand drives and we had to drive on the right hand side. It felt so strange but I soon adapted.

After my time in Egypt I went back to good old “Blighty”. After Army life I got a job in Civvy Street, working in a rubber factory in Barking Essex near where I lived in Becontree. I met my future wife Dorothy who worked in the rubber factory office.