The Jones family were originally slate miners from North Wales and they moved to South Wales when the coal mining boom started and became coal miners.  My grandfather, William Morris Jones, had started working down the pits at the age of 16 in 1911.  The 1911 census shows that they lived at 26 Pantglas Rd, Aberfan, which was of course the very scene of the sad coal mining disaster in 1966.  In 1914, William Morris joined the Royal Army Medical Corps and found himself posted to Gallipoli where he contracted malaria.  After the war he married my grandmother Mary Ellen Jones (nee Anderson) who was from an Irish Catholic family and my grandmother (who was an only child) was completely disowned by her Irish family because she had married a non-Catholic.  As far as we know she never ever saw her parents or family again.

As a result of the malaria contracted during the war my grandfather suffered chronic breathing problems and was advised to move from South Wales to the countryside for the better air, hence the move to Somerset.  They did not immediately move to Langport but the family went to Pawlett and then to Wiveliscombe.  I would estimate that they moved to Langport in about 1934 and they lived at Beards Yard on the edge of the moor, where it was invariably cold and wet in winter.  In addition to my father there were two daughters from the marriage, namely Catherine & Olwen.

In 1935 my grandfather passed away at the age of 39, never having recovered from the bout of malaria.  Frequent visits had been made to Rookswood Hospital in Cardiff and that is where he died and was buried at Llandaff Cathedral.

My grandfather had been in receipt of a disability war pension, but that ceased on his death.  One cannot imagine how my grandmother managed to bring up three children in the depression of the 1930’s.  However, my father does recall that she would earn a pittance by stripping withies by hand and she would return home with her hands bleeding.  Mary Ellen Jones remained a Langport resident until her death in 1968.  She was well known in church circles having been a church cleaner for many years at All Saints’ church.  It would appear that her devotion to the Church of England stemmed from her Catholic family disowning her, but I am only surmising.  I should add here that she would never talk about her background and her three children knew nothing about where they came from (other than a vague connection to South Wales) until I took an interest in our family history some 20 years ago!

At the age of 14, Bill left Huish Episcopi school and found work wherever he could find it, including a job at Paull & Co in Martock, a tent maker.  However, a war was looming and at the age of 19 he volunteered to join the Royal Navy.  After training in Devonport, Plymouth, he joined HMS Chaser, a merchant ship that had been modified into an aircraft carrier.  He joined Chaser for sea trials in Chesapeake Bay and the ship had engine failure, so it was a sitting duck for German U boats.  Thankfully it managed to limp back unharmed to Mississippi, but it was a frightening experience for the young sailor. 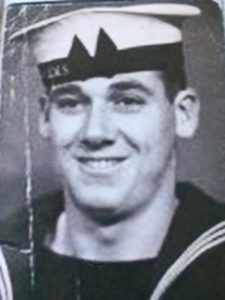 HMS Chaser was joined by a squadron of Swordfish and sailors were offered the chance to go up in one on a practice flight.  My father put his name his name on the list for a flight.  During some practice runs he witnessed several aircraft not making the runway on deck or overshooting the end of the runway and he promptly removed his name from the list.  He never did fly after that!

HMS Chaser completed trials and was then deployed on the Russian Convoys.  This was the trip that Churchill said was “the worst in the world”.

On one such trip they were heading to Murmansk and there was great excitement on board ship because after months at sea, the all-male crew were due to rendezvous with a Russian supply ship crewed by an all-female crew.  The excitement soon evaporated when they pulled alongside to witness women with beards!

He was posthumously awarded the Arctic Star Medal, which was commissioned in 2012 to recognise the outstanding bravery of the servicemen who delivered vital aid to the Soviet Union between 1941 and 1945 on the Arctic Convoys.  These men were under constant threat from enemy submarine, air and surface ship attacks, while dealing with terrible weather conditions and glacial temperatures.  I accepted the award on behalf of my father at RNAS Yeovilton in 2014.

As a result of his previous work at the tent maker, he was given the title of “sailmaker”, an old position that survived from the days of the Royal Navy sailing ships.  Duties included the stitching up of body bags and any other duties requiring the use of a needle and thread.  One day my father was summoned to see Captain R. McClintock of HMS Chaser and wondered what he had done wrong.  The captain requested him to sew some badges to his uniform and because he did such a good job, he was allowed a drink from the Officers Mess.  He went along to the Mess and ordered a beer and was told in no uncertain terms that this was not recommended.  Beer was very much a delicacy because of the room that it took up by volume.  He wisely chose a tot of rum!

After having spent time during the war in New York, India and Russia, his final posting during the war was in Sydney, Australia which he fell in love with.  He considered staying and becoming an Australian citizen but having not seen his mother and sisters for two years he decided with some reluctance to return to Langport. I think that this was probably the most difficult decision of his life.

After returning from Australia, he lived with his mother at Beards Yard and took up a very good post in the Civil Service at Westonzoyland.

He became a keen darts player and played in the very successful Dolphin Hotel team that competed one year in the News of the World tournament in London. Such was the demand from the people of Langport to watch this team, many would gather on the pavement outside and watch the matches through the window.

I am unable to confirm to what extent his involvement was, but he certainly had two stories that he told about Langport at this time. Somebody apparently climbed up to the town clock to remove the clock hands and prior to a General Election somebody painted the town red (literally) with red painted “VOTE LABOUR” messages. I have heard that this may have made the national press and perhaps somebody could confirm this? What Bill was most certainly involved with was midnight swimming races on the River Parrett when bets were taken on the outcome!

After meeting my mother Joyce Jones, nee Wybrow, Bill realised that while he stayed in Langport near his mates, he would not be able to save money to get married and therefore he moved to Salisbury briefly to work on erecting pre-fab homes which were erected to fulfill the post war demand for homes.

He had numerous jobs in his lifetime but those close to Langport included working on the railways, working for SWEB in North Street, working for a swimming pool contractor in Pibsbury and finally being a groundsman at Huish Episcopi Comprehensive School.

My mother Joyce was a war time evacuee from the east end of London and was evacuated with her brother Harry Wybrow.  Many people will remember her as being a cook at Huish Episcopi Primary School for over 30 years.  My mother passed away in 1993.

The Bill Jones I knew, by Colin Edwards

I knew Bill when he was a groundsman at the school, where I was a lab technician.  He was a lovely man, so helpful, he would do anything for anyone.  We both lived at Garden City, and at one time our wives were dinner ladies together, first at the primary school and later at the secondary school.

Bill was also our reserve skittler for the Dolphin Skittles Team.  In the early 1970s the team was very successful, winning Division One of the Sedgemoor League three years in a row (1974/5, 1975/6 and 1976/7).  There were 8 people in a team, and Sammy Mitchell was the captain.  If someone didn’t turn up or couldn’t come, Bill would stand in for them.

The Dolphin Hotel was the ‘in’ place in those days.  When the landlord, Alec Purchase, was building himself a big place at Drayton, Bill helped him build it.  He probably got paid in beer!