The names of the men who died in the First World War who are commemorated on the board in All Saints’ Church are:

Biographies of these men, newspaper reports and information about their last resting places can be found in our publication: Not Just Names. Details are on our Publications page.

This board also commemorates D Shute and T Wood, who died in the Second World War.

There is also a Roll of Honour listing those who served in the First World War.

The wording on the board reads: “Langport Memorial Recreation Ground.  This field was purchased in 1920 as a memorial to the men of this parish who gave their lives in The Great War 1914-1918 and was dedicated to the enjoyment of the public for ever.”

The memorial plaque dedicated to Arthur H Manning, which was on display in the Langport branch of the NatWest bank before it closed in 2017, has been installed in the Street branch. 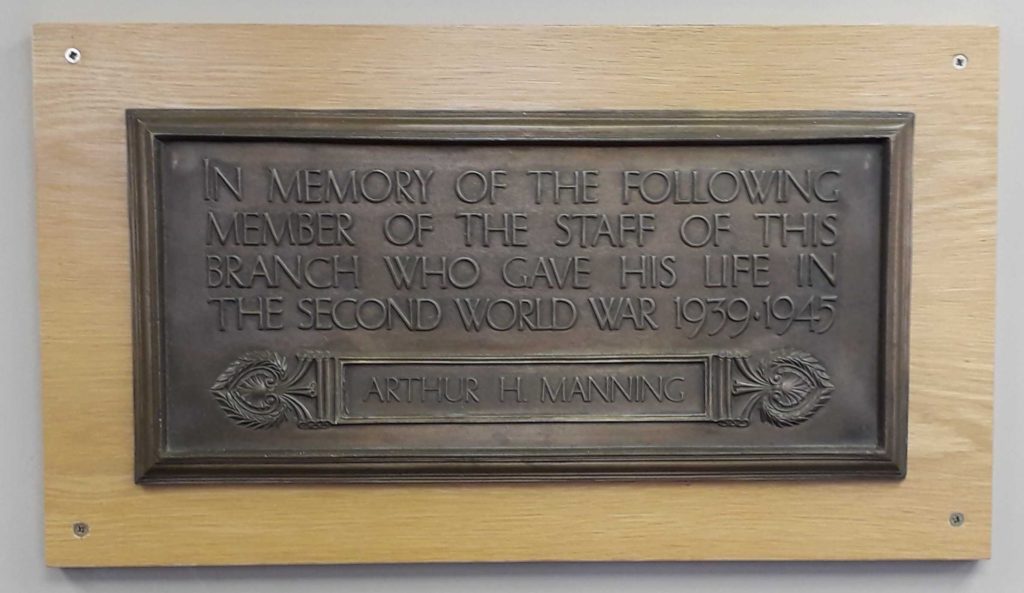 Arthur Herbert Manning was born Topsham, Devon on 27 February 1911, the son of Herbert and Frances Ella Manning.  His brother, David George Manning, was born nearly four years later, on 14 December 1914.  Their father served as a gunner in the Royal Garrison Artillery in the First World War and died in France on 14 August 1918, leaving Frances with two small children.

According to the NatWestRemembers website, Arthur joined the Wellington branch of Westminster Bank (as it was then called) in 1928.  He worked at various branches before joining the Langport branch in November 1937.  He was called up in September 1939 and fought with the Essex Regiment.  He was killed in action in Italy on 2 November 1943 and is buried in the Sangro River War Cemetery.  His mother died the following month, on 9 December.

The Siege of Sevastopol was the final battle of the Crimean War, when the Allied forces (British, French and Ottoman) defeated the Russians in 1855 and took control of the Black Sea port. Trophies of the war were claimed by all sides, but in the British case, most of the trophies were cannons, with some bells and other smaller items. Over 900 guns, mostly made of iron, were shipped back to Woolwich Arsenal, along with 10 bells.

Despite a desire in some Government quarters to avoid triumphalism or the glorification of war, public pressure built up for the cannons to be kept as a memorial to those who had sacrificed their lives in the campaign. Eventually, in January 1857, the Government decided to distribute the guns to military and naval establishments and to deserving or desirous British and Irish towns and cities ‘as have proper public places to put them in’. Many were also sent to other parts of the Empire, mostly to Canada, Australia and New Zealand. The only conditions were that the recipients should agree to pay the transport costs, and to have the guns properly mounted and displayed.

In Langport, Edward Quekett, a manager in Stuckey’s Bank and member of the Corporation, was quick off the mark in writing to Lord Panmure, Secretary-at-War, to ask for a Sevastopol cannon. It arrived by train in April 1857 and was installed in a copse on The Hill, near Vincent Stuckey’s house (later St Gildas Convent) and across the road from All Saints’ Church.  It was 9½ feet long and weighed over 2 tons, decorated with the Russian Eagle and Imperial Crown and was made in Russia in 1842.  It was the first cannon to be presented anywhere in Somerset.

Like most other cannons, Langport’s was melted down during the Second World War, but not until 1943.  The Taunton Courier of 24 April reported that ‘Its fate has been debated on various occasions, with the result that it has now been removed by the scrap metal dealers who purchased it from the Town Trust.  The proceeds of the sale are to be devoted to the Russian Red Cross Fund.’

This is an extract from a longer article which appeared in Level Talk 2021.